There will also be electricity in the surrounding four counties thanks to this beautiful building!  Water diverted from the Saint Mary's River comes through a canal and dumps into 70 or 74 turbines, depending on who you talk to!   When we heard there was a salmon-raising facility here, Barbara went on the hunt and found we could get a private tour ... all it took was a phone call! 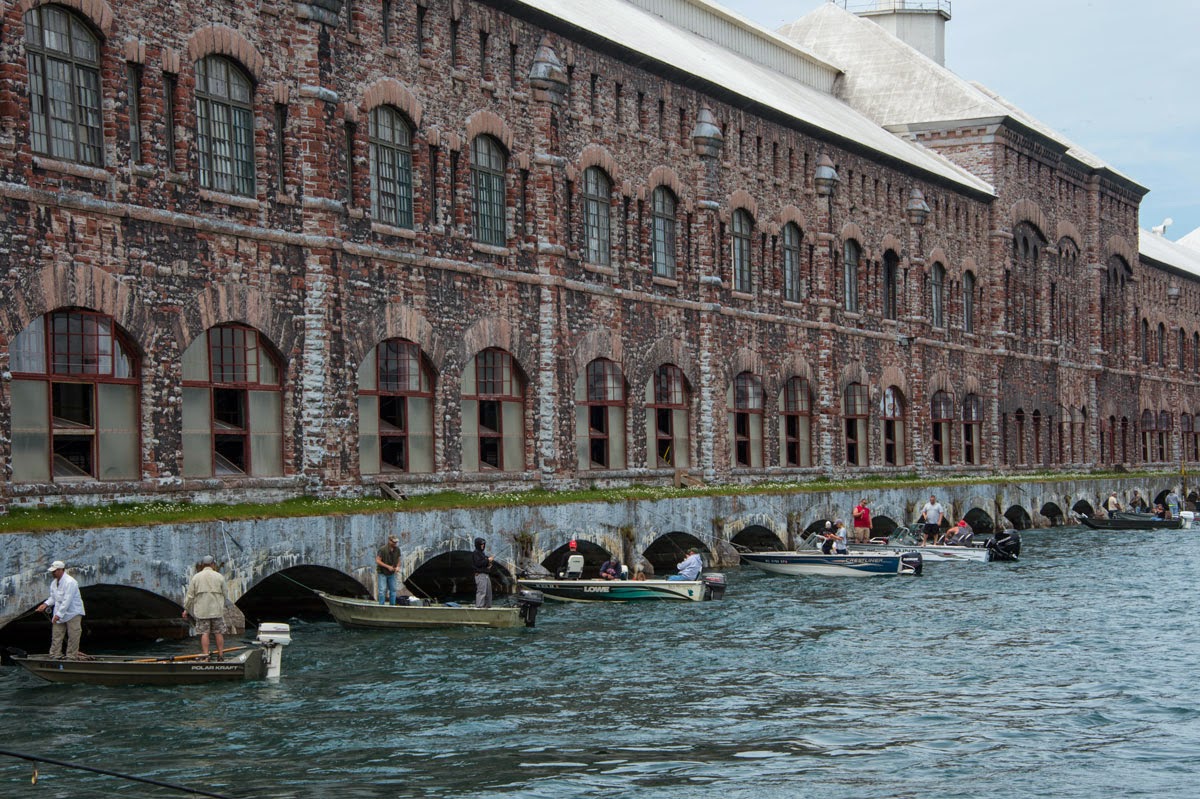 The REAL story inside this building is what we learned from Ryan, a student at the Lake Superior State University Aquatic Research Laboratory located in one end, replacing four of the original turbines.  Students looking for degrees in wildlife science management can find summer employment (and great work experience) in this research center that raises Atlantic salmon for the huge sport fishing industry in the Great Lakes.  What is known as Fish and Game in California, is the Department of Natural Resources (DNR) in Michigan.  You would never know this was here unless you rode the Soo Locks Tour Boat!! 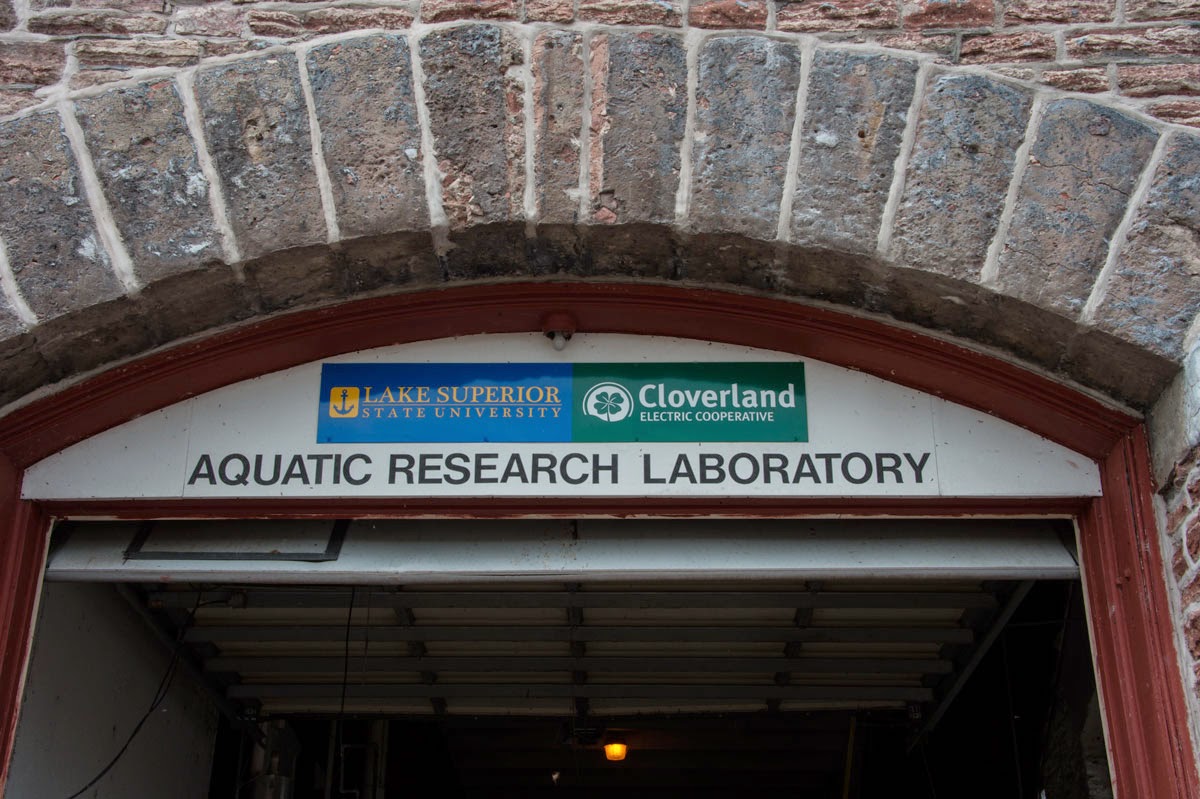 Students run this facility that catches salmon, takes the female eggs and the male sperm, mixes them together and sends the buckets to the DNR, who hatch the eggs and raise them to small fry size.  40,000 are then transferred back to this facility where they are kept in four huge vats, in the dark (so they are more relaxed, eat more and therefore grow faster) and fed every hour during the day with special food from both Canada and Oregon.  They are monitored in a controlled oxygen environment with water flowing directly from the canal into the tanks and out the bottom screen you see under the babies here.  When about six to eight inches long, they are dumped out the hole in the floor (under the screen), directly into the river. 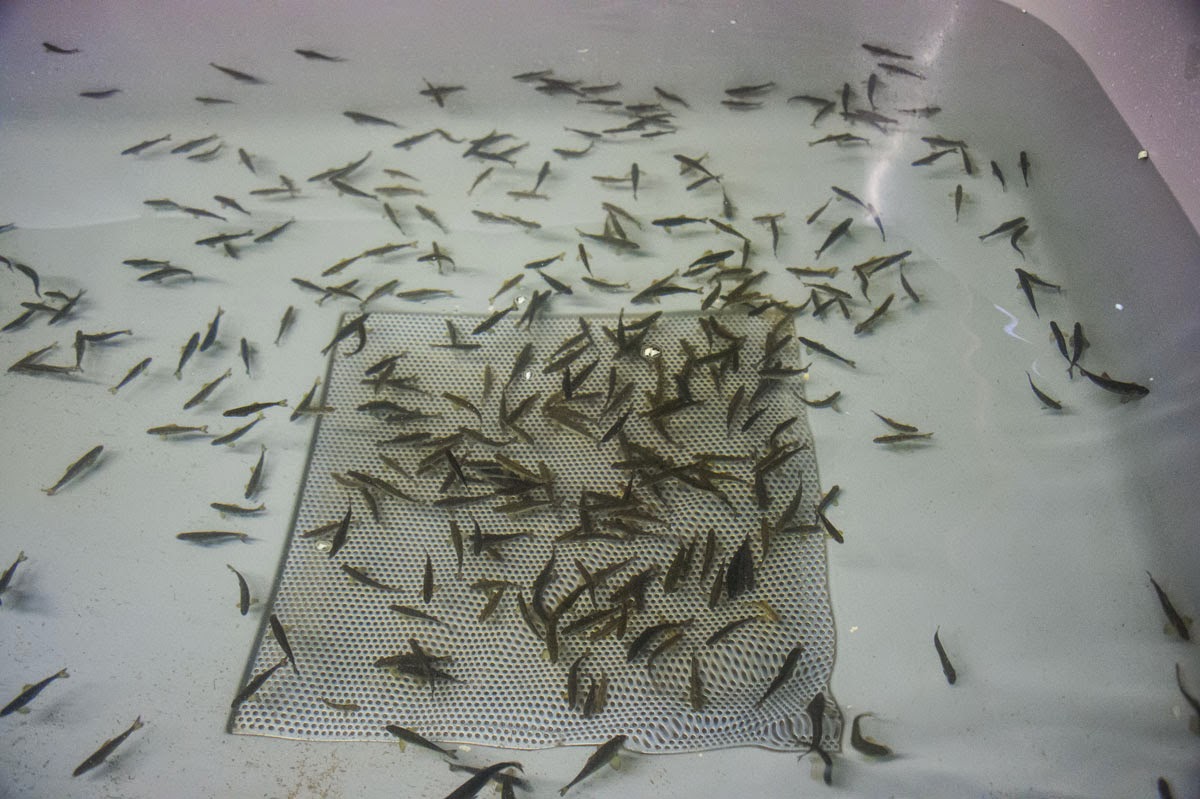 Other salmon like the Coho, Pinks, Chinook and King are too aggressive towards the Atlantic, so they survive in the Great Lakes only thanks to this project.  When the Atlantic are released, the fins are clipped to denote the year.  As you can tell from the line of boats fishing above, they are very popular eating!! 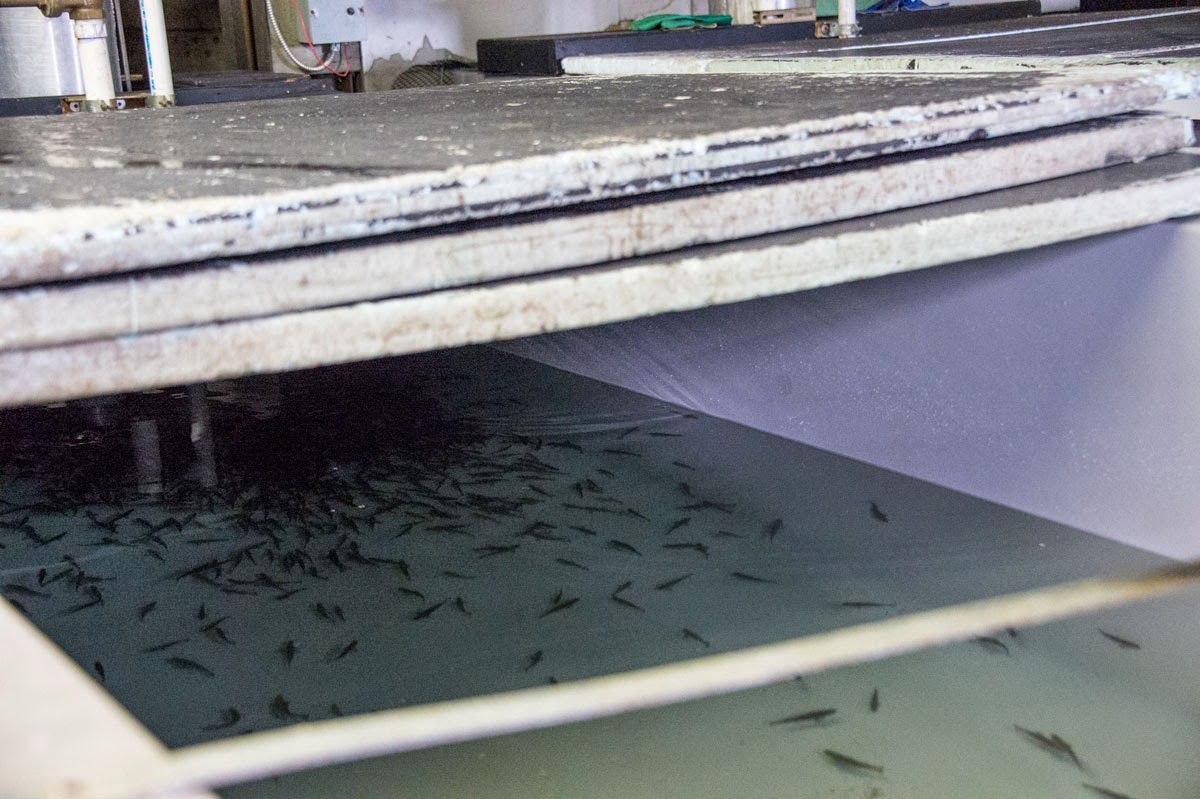 One of the other thesis projects a student wrote had to do with lake sturgeon, two of which they still have at this facility.  Sturgeon are not prolific here, and can only be caught by locals, and only one per year is allowed. 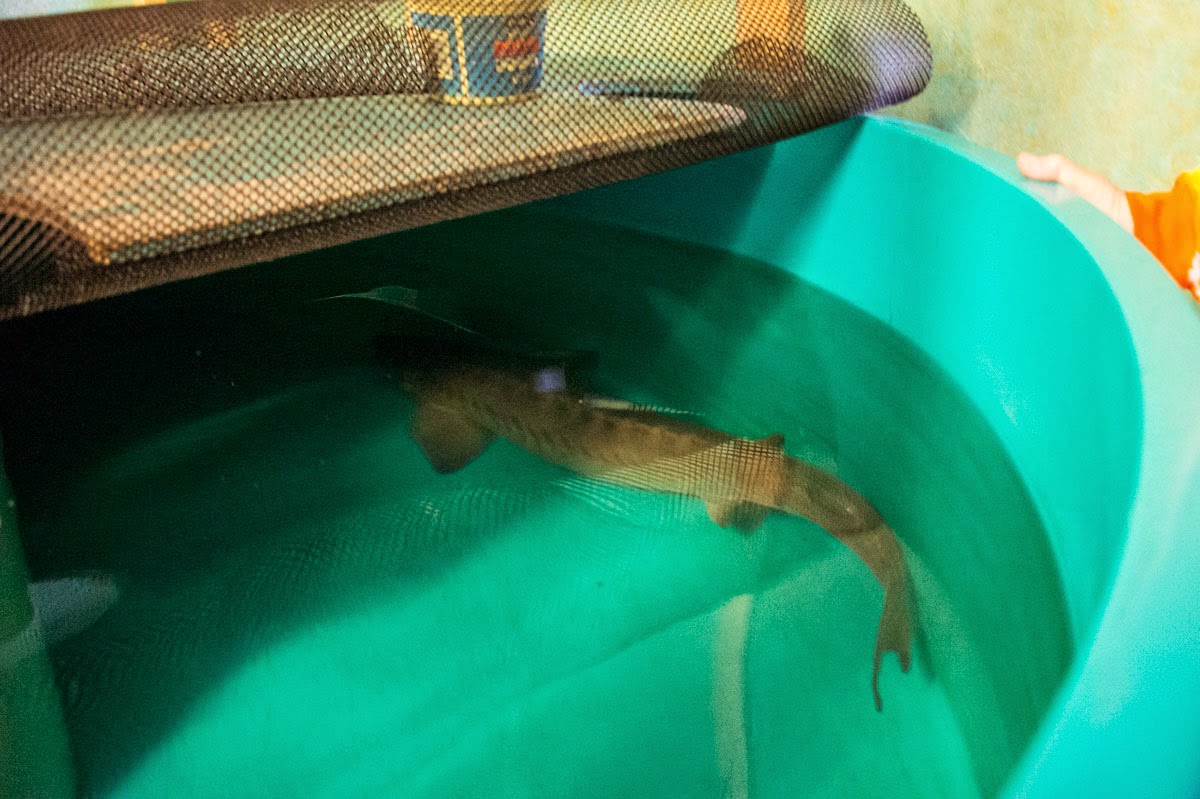 The students not only take care of all these fish, they do research projects in the river with the DNR on many other types of fish to keep them all happy.  One of the big problems in the Great Lakes is the Lamprey, a nasty creature that grabs on to fish with it's sucker like mouth, eventually killing them.  They are always working on ways to eradicate the lamprey without hurting the other fish. 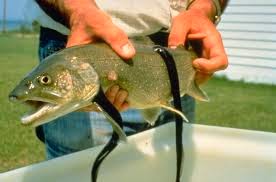 Just a few steps away, the first in a line of 70 turbines was whining away ... quietly!  There was very little noise and no vibration at all, either from the wall of water directly behind the stairway or the row of machines pumping out electricity. 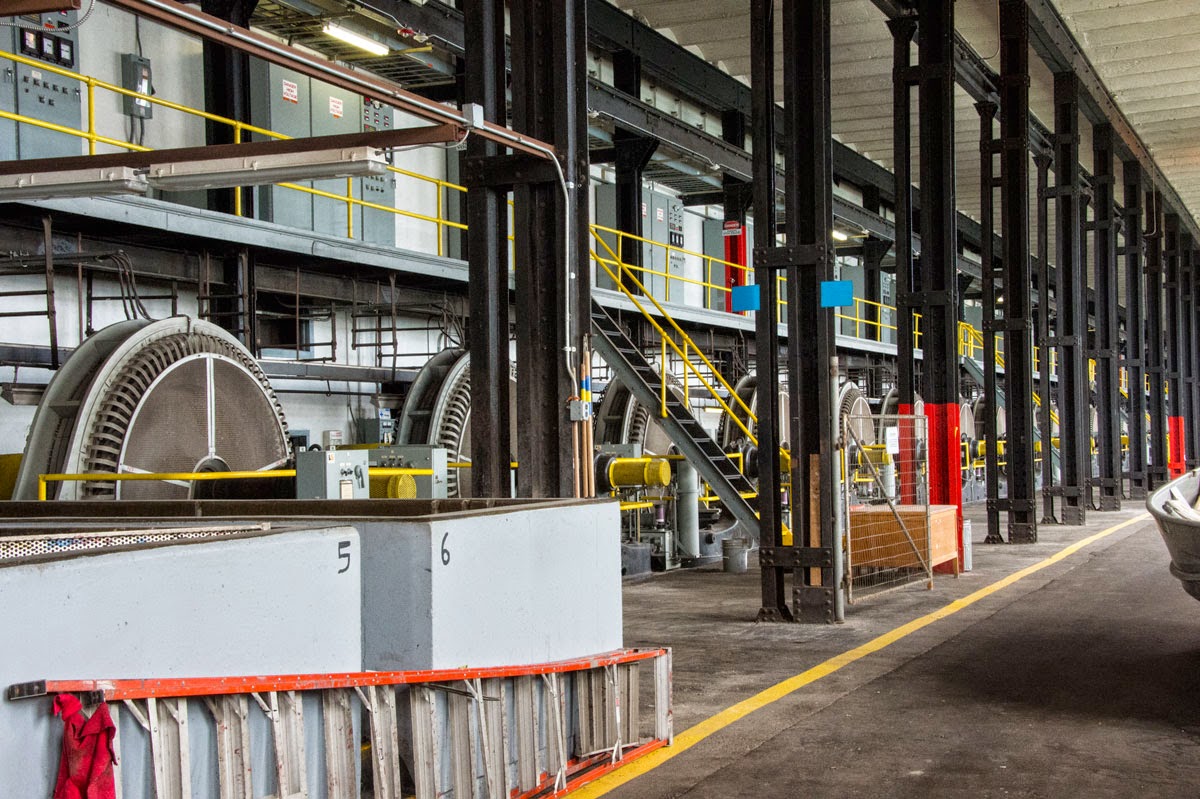 This is our last morning in Sault Saint Marie as we pack up and head South this time, to Mackinac Island ... better known as "that place the great fudge comes from"!!!

Posted by Nancy Kissack at 3:52 AM