Not the green of money nor the green grass out front ... I spent the day yesterday swimming with magnificent Green Sea Turtles!!  This is why I love Maui so much.  Even though I moan and groan about the cost and leaving my puppies for two weeks, swimming for a couple of hours with these beauties in the ocean, makes it all worth it!!

Did I ever mention I'm a Scuba Diving Instructor??  So you KNOW I've got lots of gear for this sport.  Loaded up with fins almost as long as I am tall, mask and snorkel, dive shirt to keep warm longer and my trusty point and shoot in a waterproof case (you didn't think I took my Nikon down there!!!!) and we were off for a gorgeous day of snorkeling and swimming at Ahihi Bay Reserve on the south end of the island.  Turtles in the ocean are not easy to find.  Their coloring blends in with the rocks and coral so well that most people miss them. 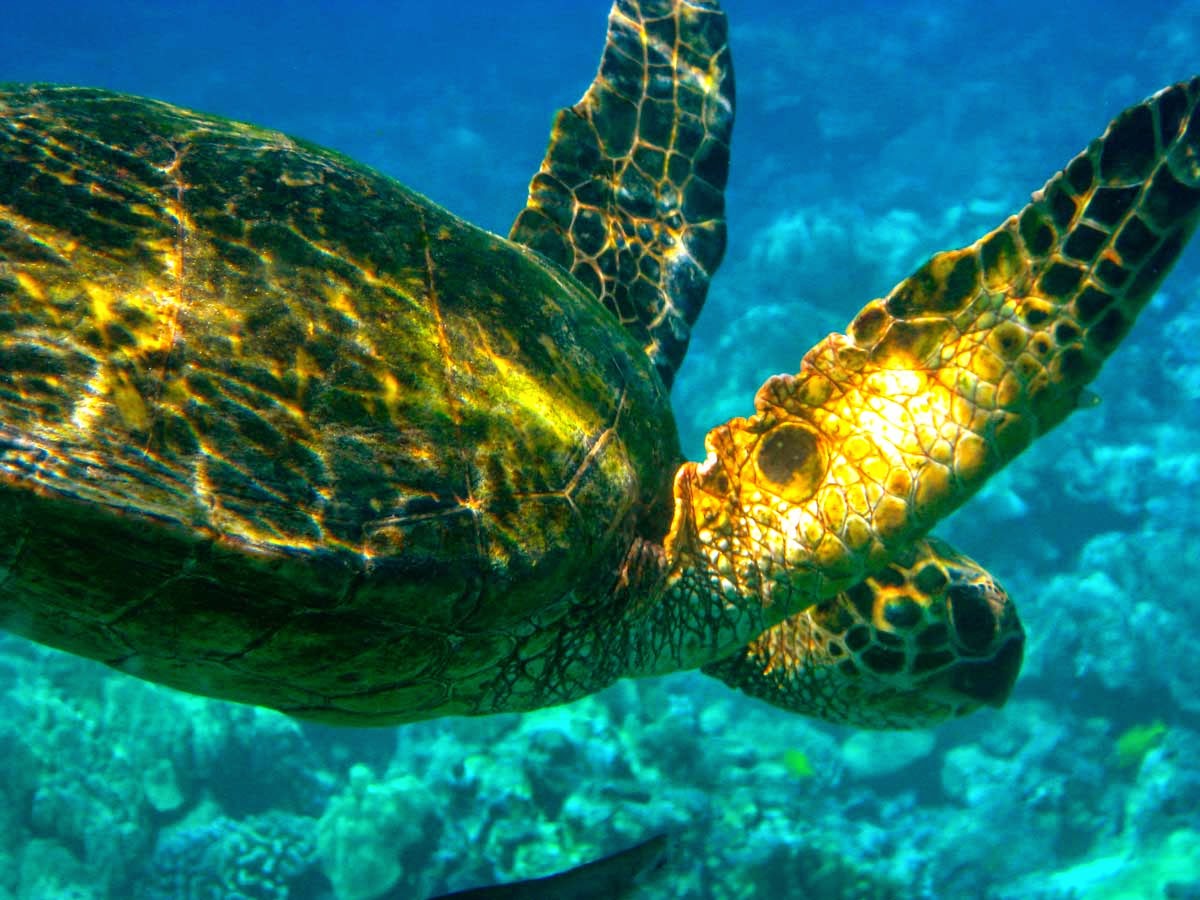 This guy was hiding under a large outcropping of coral.  Once located, you need lots of patience and water-treading skills for 20-30 minutes until they begin to rise for a large gulp of air. 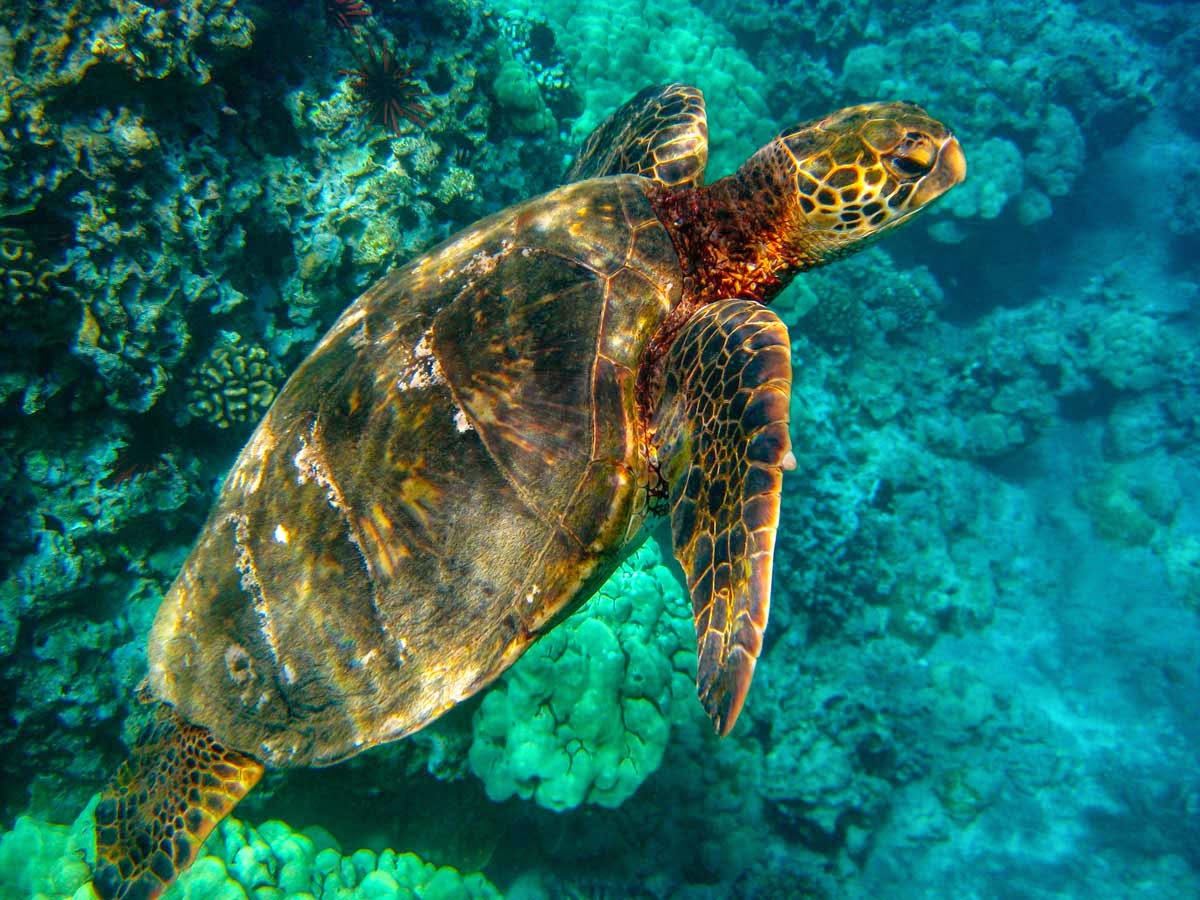 It is illegal to touch or bother them in any way, so I keep my distance and just float along with them.  It's amazing how they seem to fly underwater while moving so slowly ... like in slow motion!! 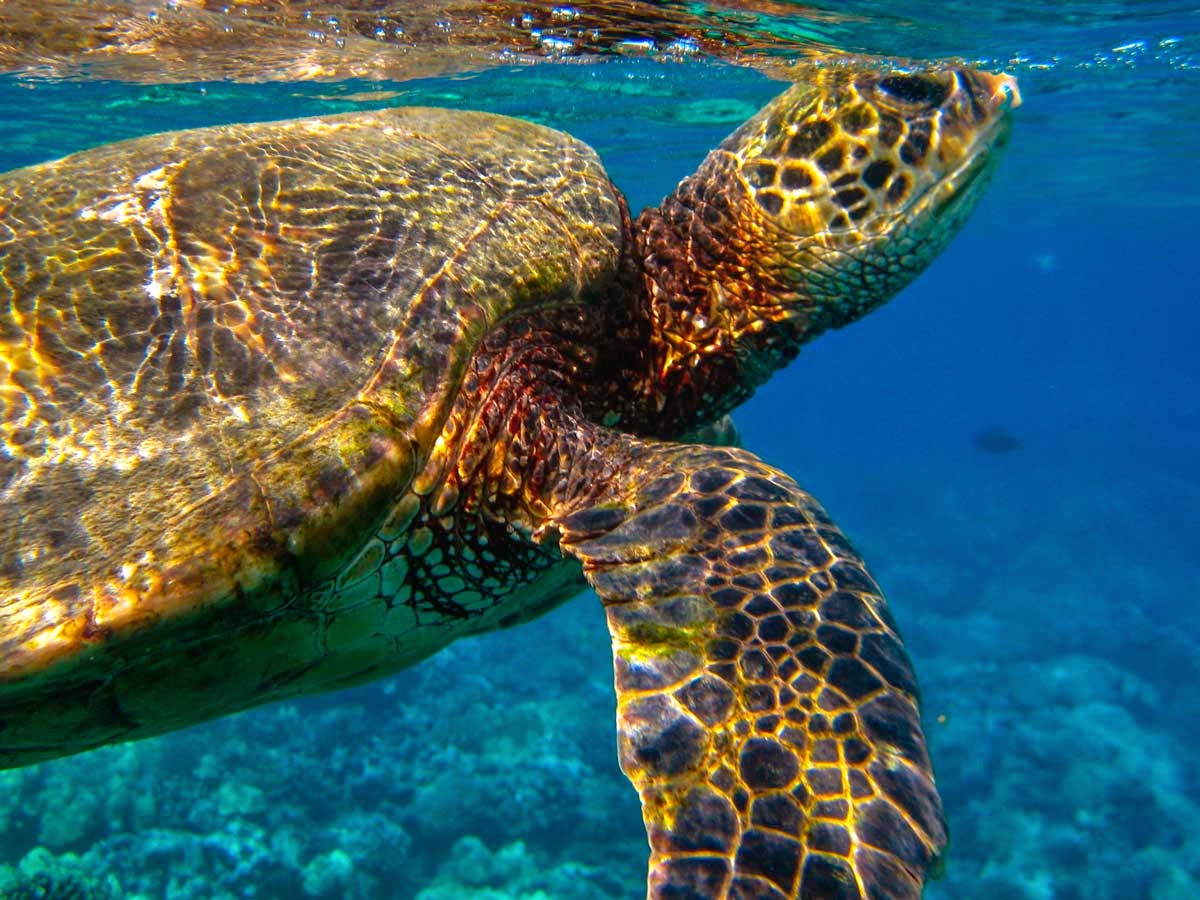 With a big swoosh, they exhale and inhale, then relax for a few seconds and do it again.  After three or four breaths, they usually head back down to the bottom.  This baby headed out to sea where I followed for a short time before returning to the second one we located. 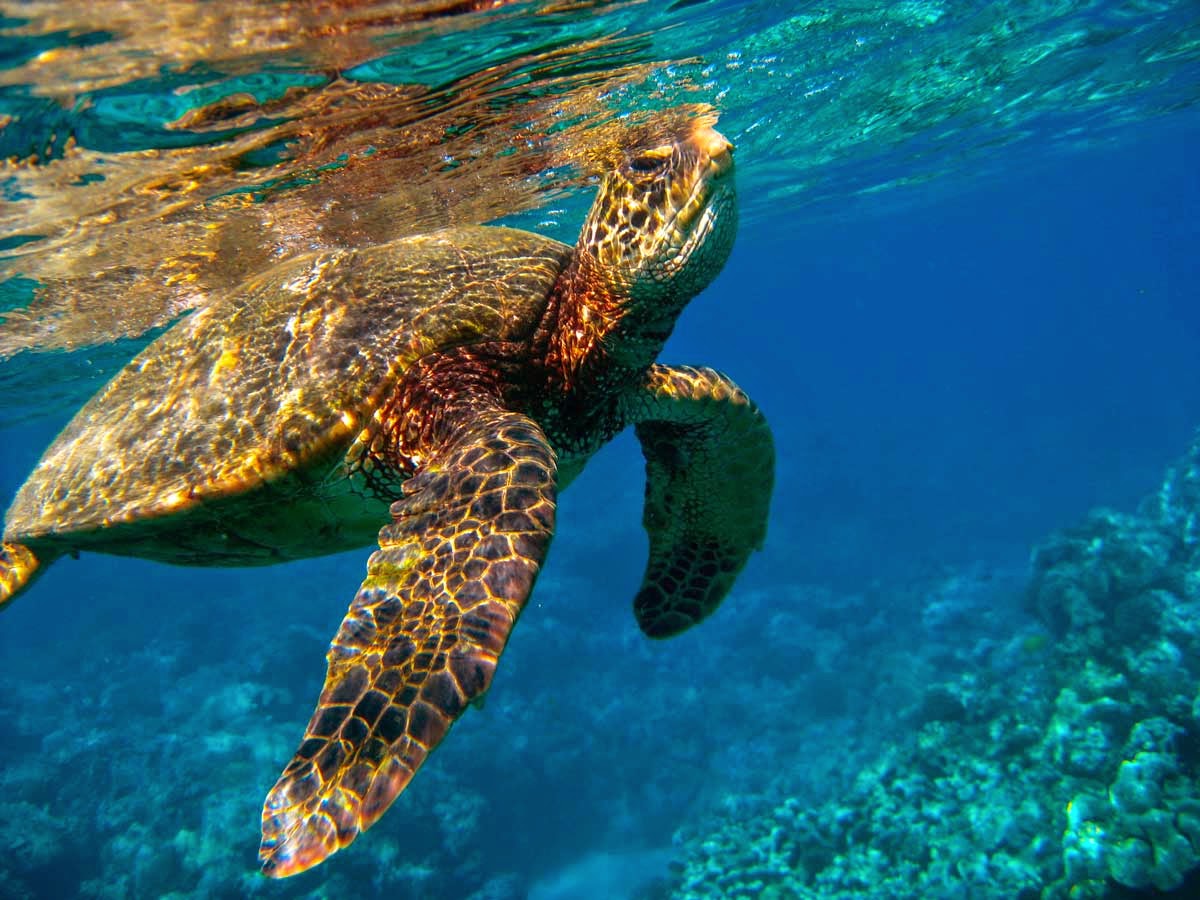 While resting on the bottom, small fish clean the algae from their shells.  Without this cleaning service, the algae can get so heavy that the turtles can't rise for air. 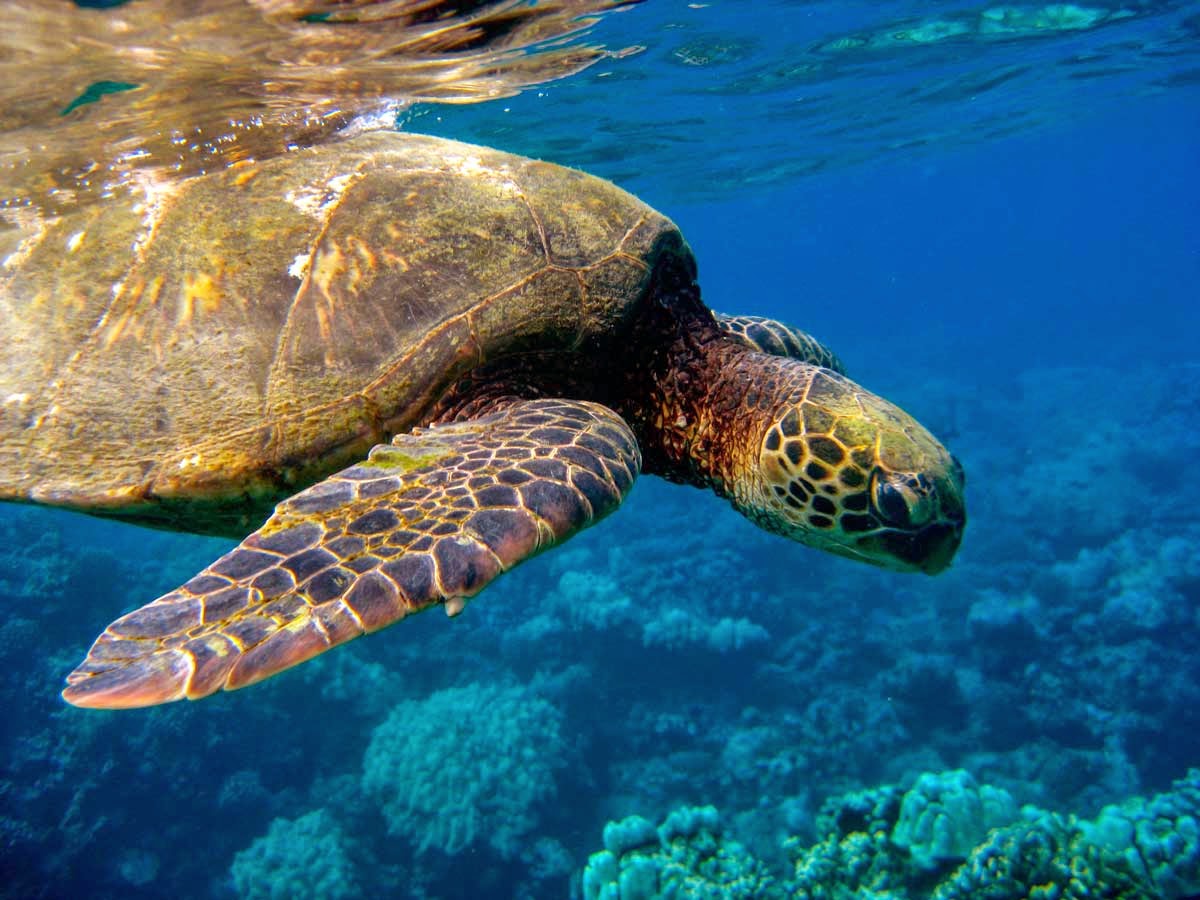 You can tell when the wind began to pick up ... the wave action kicks up sand and debris and the water started to get a little murky. 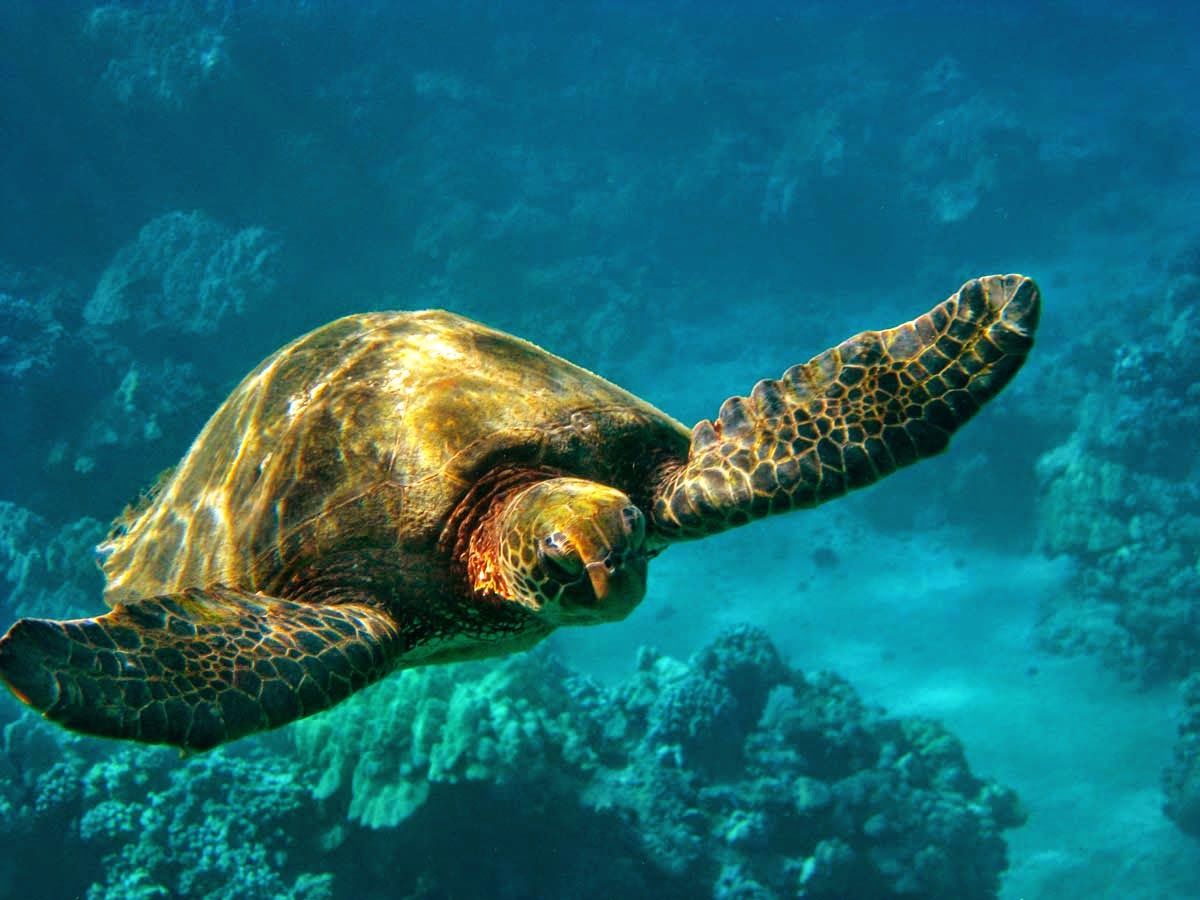 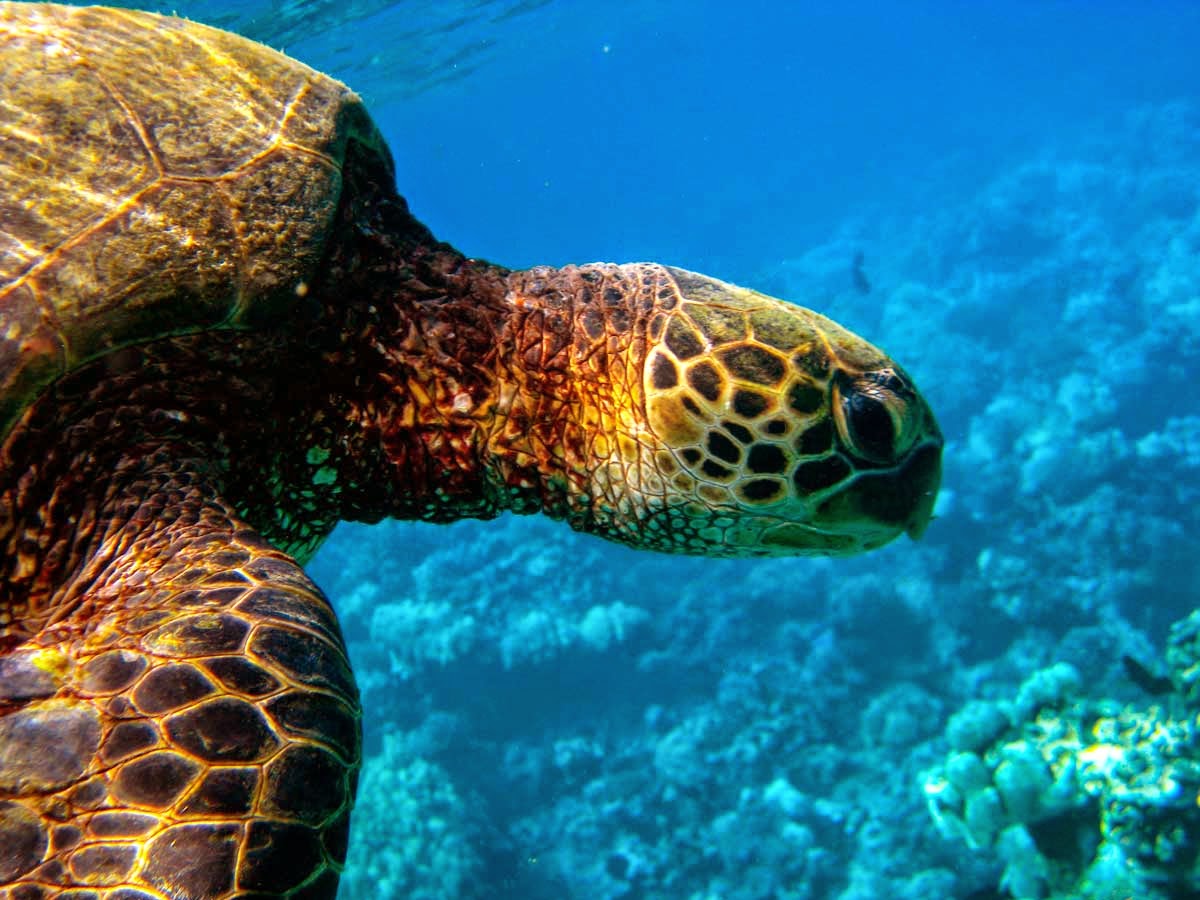 There are LOTS of other fish in the sea so I tried to get a few of their portraits too.  It's not easy to have a fish say "cheese"!!!  This is a longnose butterfly.  The black spot on his tail looks like an eye, so predators think he's going the opposite direction!! 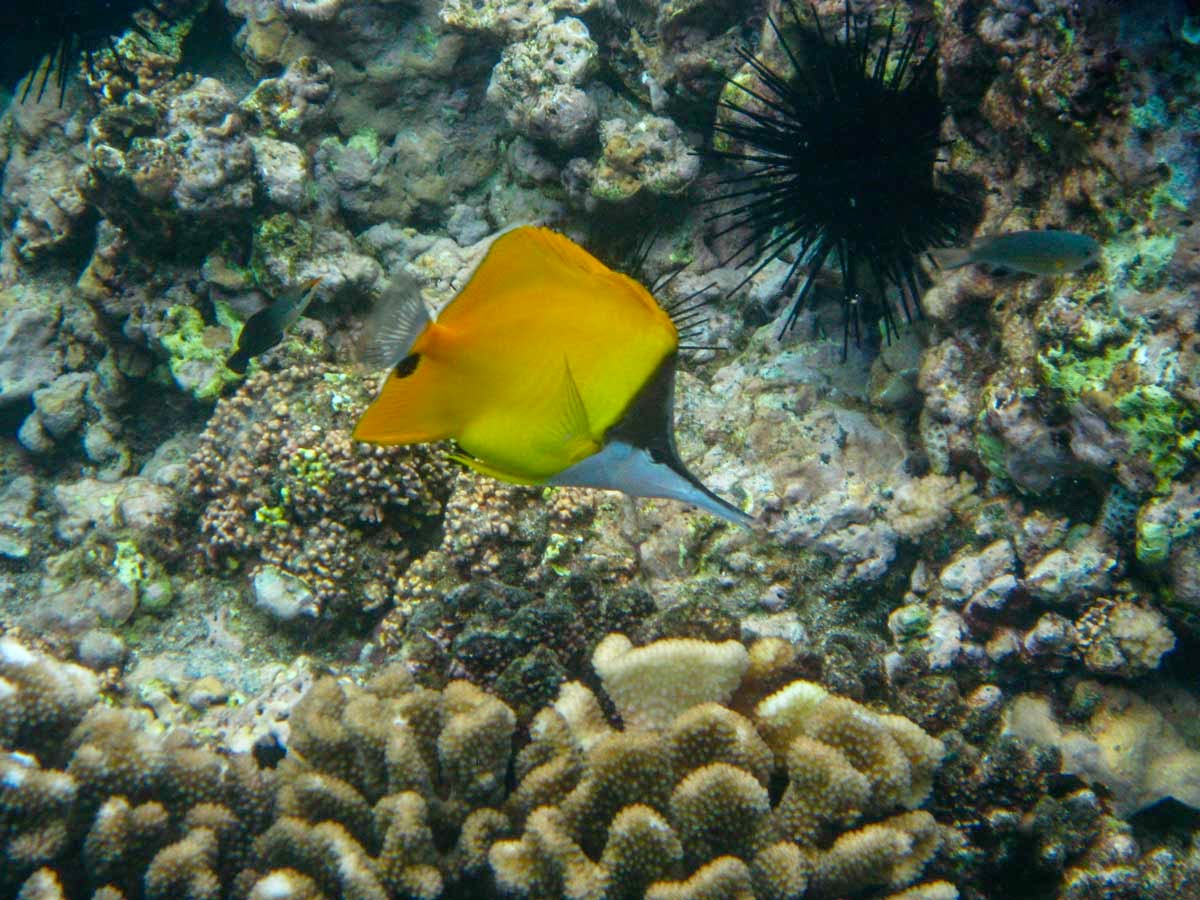 This coral is actually very yellow since it is closer to the surface ... the deeper you go in the water, the more color disappears.  Hawaii is known for their parrot fish ... looks like he has dentures!!  They use those hard bony molar-like teeth to crush the coral, sifting out the edible goodies.  What remains is the sand you see on the bottom. I think these are two ornate butterfly fish.  Just when you have the camera focused, they move or turn over so you only see blurry fish backs!! 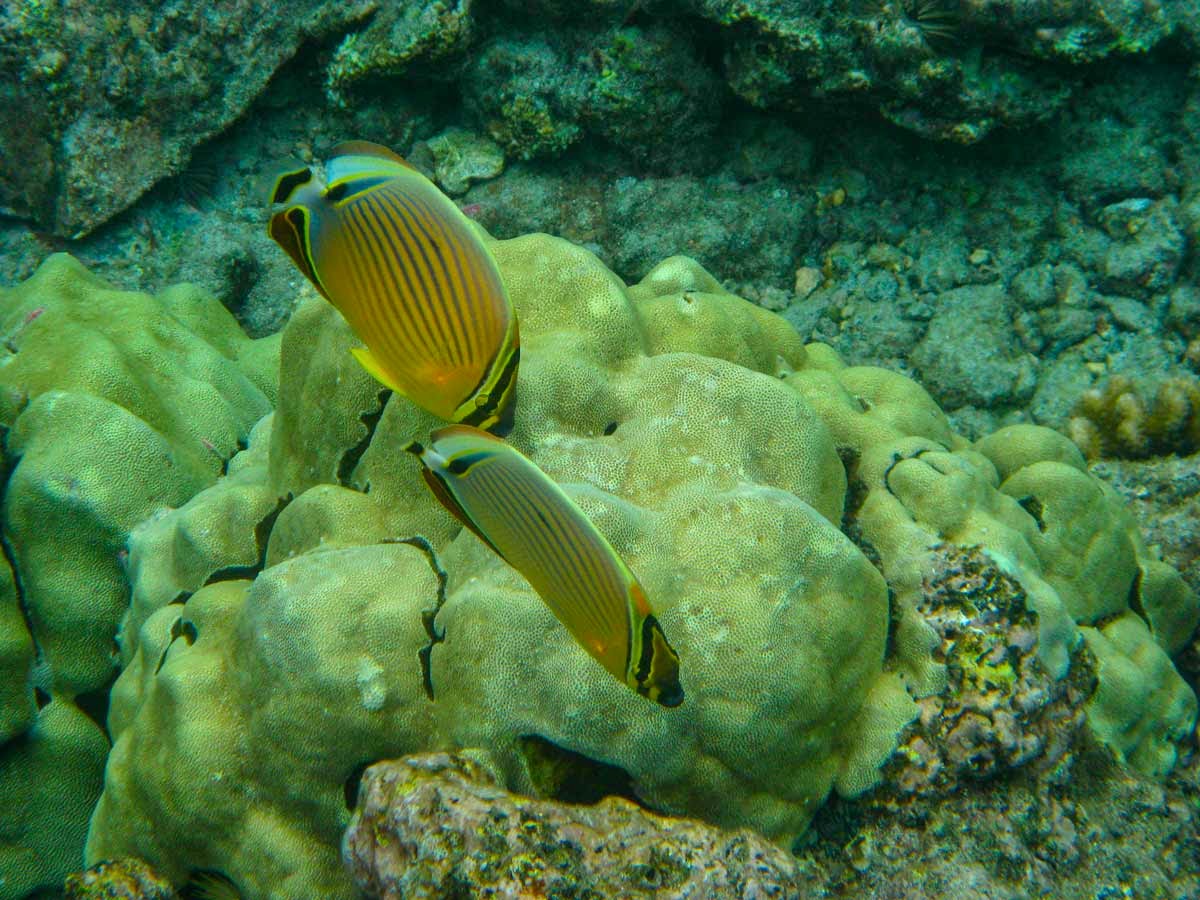 No idea what this guy is, but he was definitely big enough to eat!!! 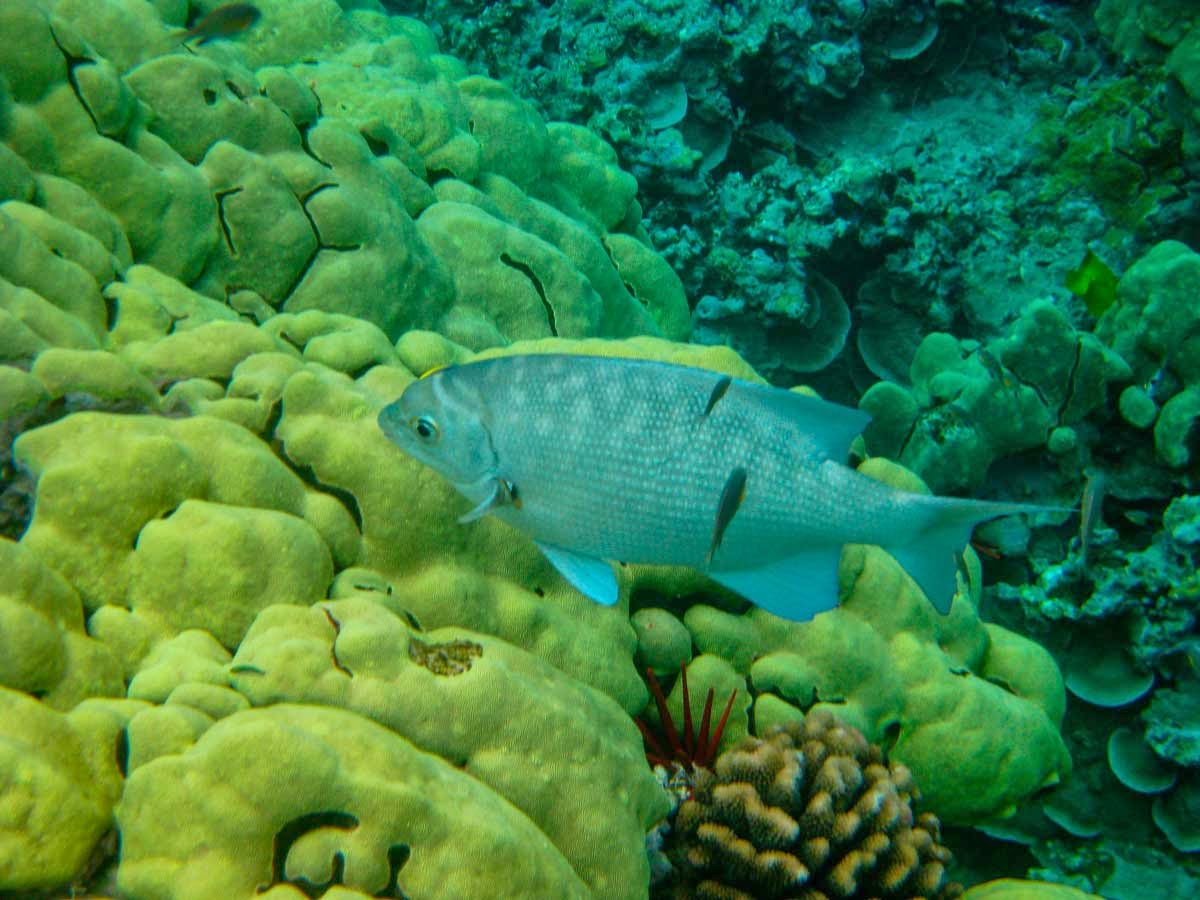 These yellow tangs you see in aquariums all over the world.  They're having breakfast!! 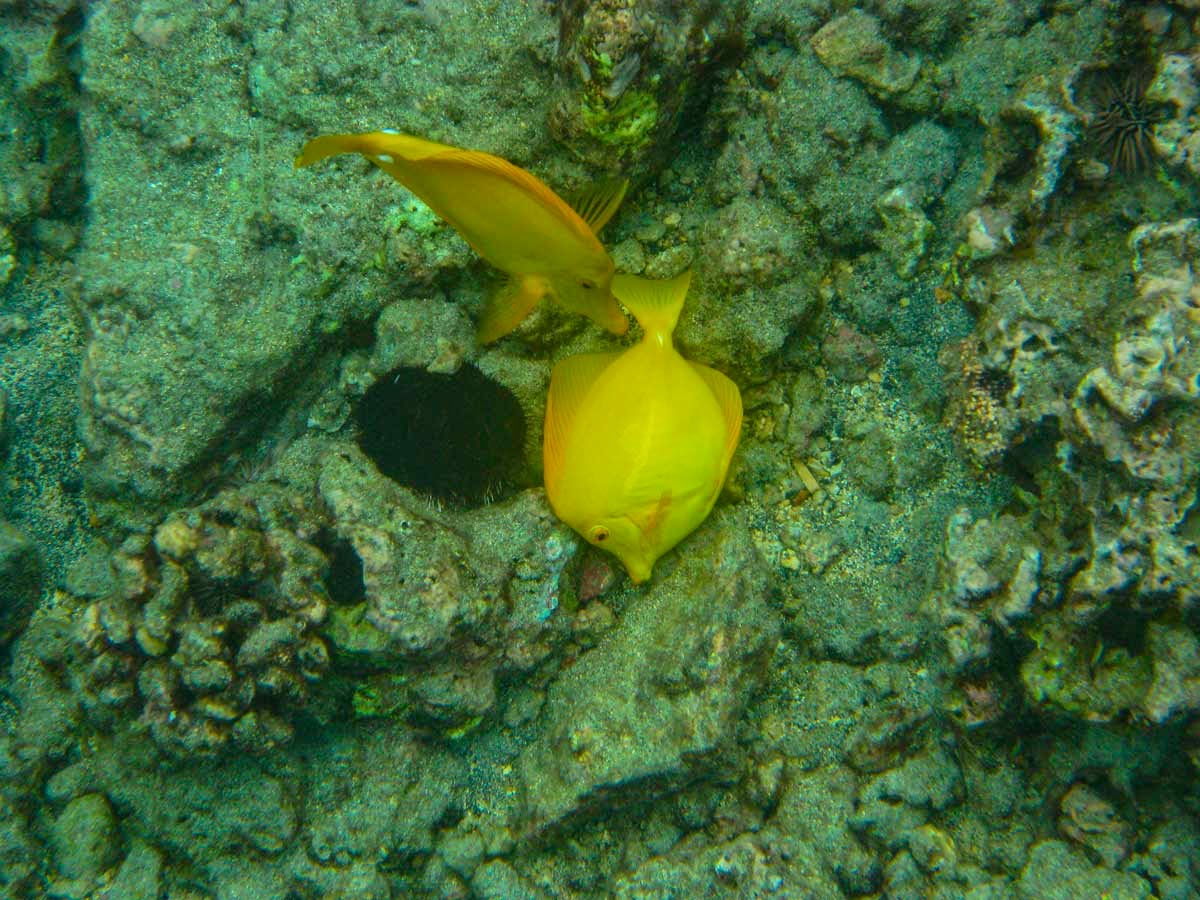 Finally an orange band in about two feet of water.  Original name, right??? 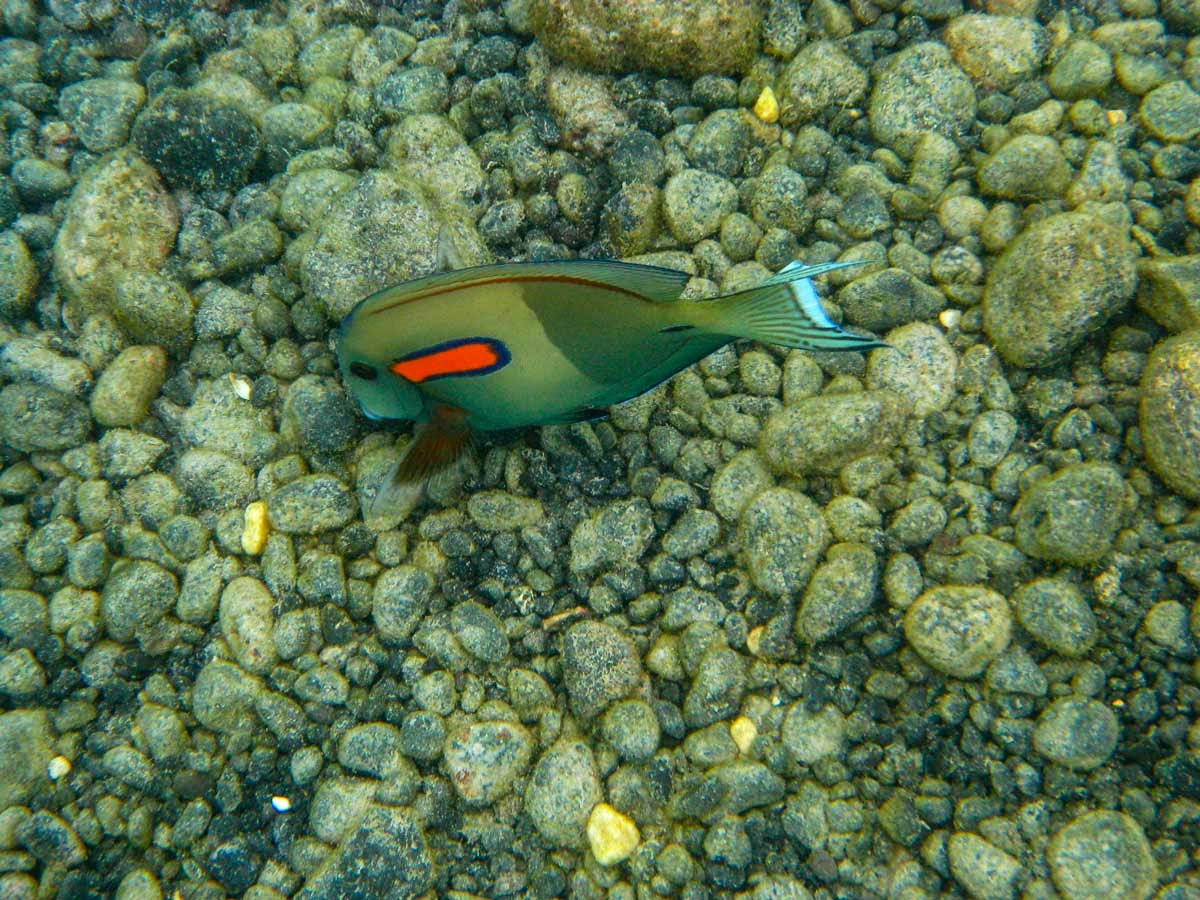 So the next time you go on an ocean vacation, talk to the locals and see where the best snorkeling spots are.  You really don't need to spend $65 each on a boat trip ... just rent a mask and fins for a week at about $10 and check out the local wildlife.  I promise you won't be disappointed!!