The weather finally cooperated and provided a beautiful sunset for me on the last night.  Yes, there were about 30 people in this image ... who magically disappeared!! 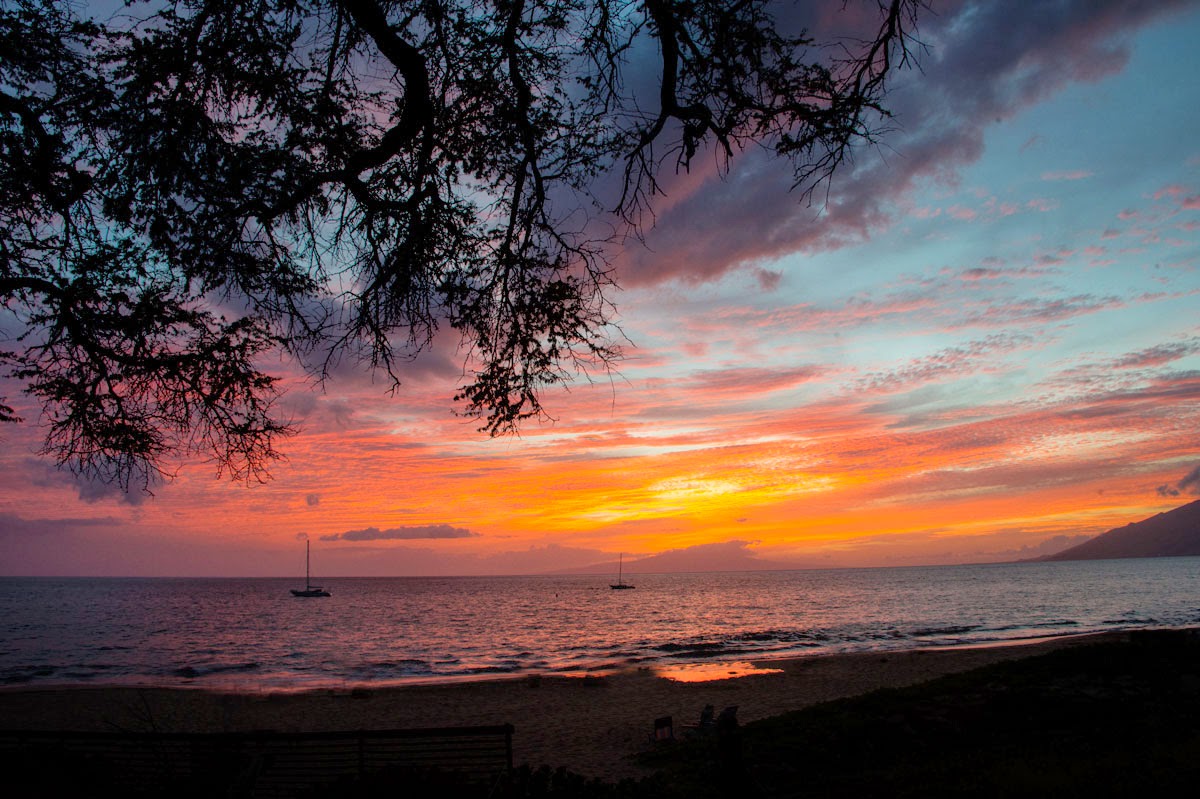 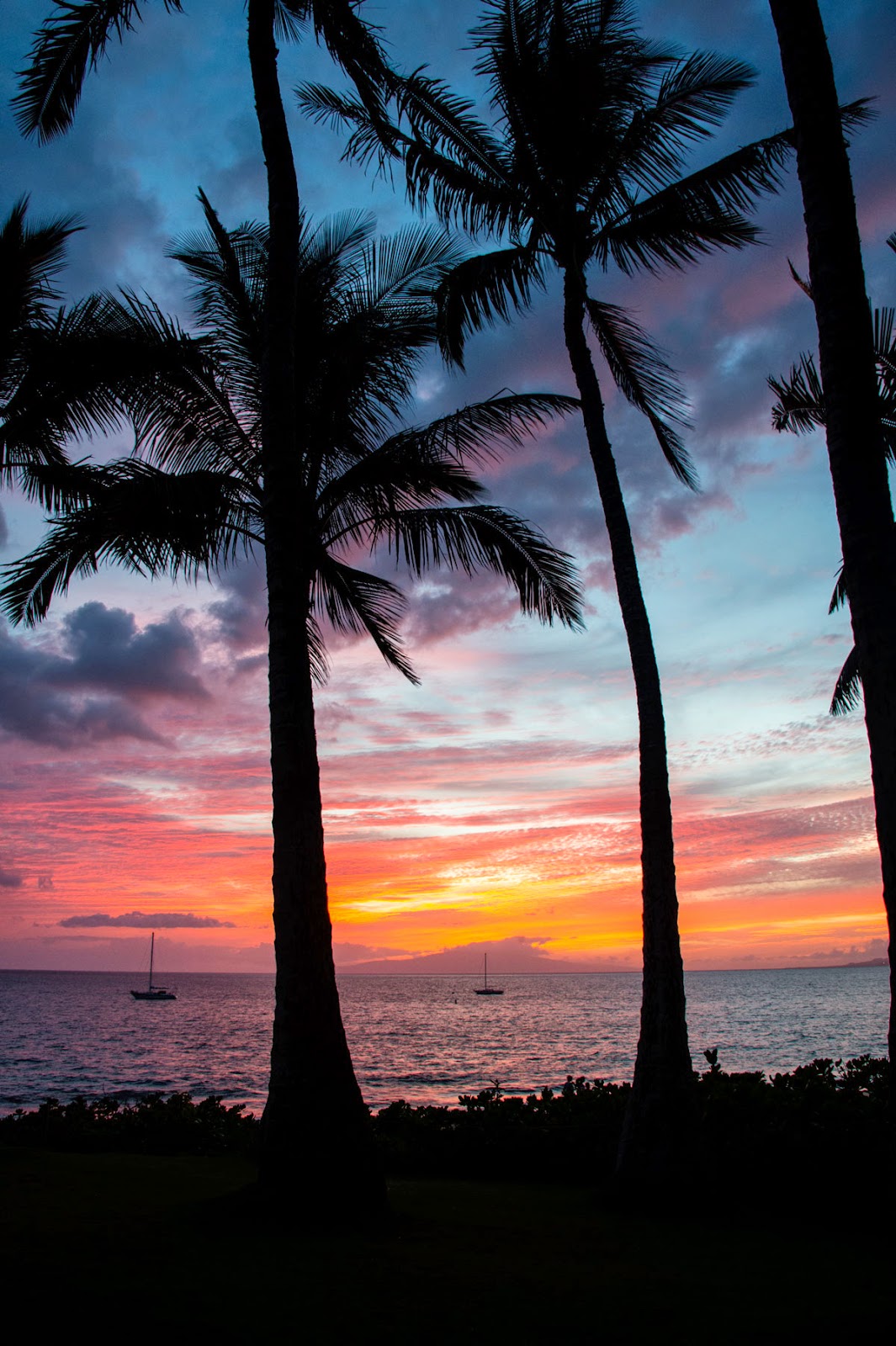 I was up at 5:00 am, packed and ready to hit the road by 7:00.  The Maui Airport can be a madhouse later in the morning, with everyone trying to get on the last plane to Honolulu in order to catch the ONLY planes to the mainland.  I returned the worst rental car I've ever had to Dollar/Thrifty Rental ... a Ford Edge, at a cost of $1,038 for two weeks (not very thrifty).  The inside was absolutely filthy and the outside wasn't any better.  The brakes were horrible and chattered at every stop.  The only good thing about it was the radio.

Somehow I got on the TSA Precheck list ... which is VERY nice.  No taking your shoes off or even removing my computer from the camera bag.  HOWEVER ... and I AM glad they are thorough ... the very nice x-ray guy thought I had a knife in the case.  First, they couldn't figure out how to unhook the side in order to lay it flat ... then couldn't find the "knife".  As with most photographers, I take everything but the kitchen sink, and there is not an inch of space that isn't taken up by some gizmo, all carefully packed.  He said his Aunt is a photographer and she always carries some special knife.  MY special knife turned out to be a pen-like flashlight.  Forty minutes later, camera bag repacked, I was on my way ... it's okay, I'm glad they are doing their job!!

No worries about getting my luggage on ... as a first class passenger my bags fly free (they should for what it cost!!) and I'll have plenty of overhead space.  It does amaze me however, even though you are only allowed two small carry-ons ... how BIG most carry-ons are ... and how many bags people get away with!!!  Being early, I got very well acquainted with the drug sniffing black lab dog as he checked out Jessie's dog hair on the leg of my levis!!

Dinner was extra special, a chicken teriyaki salad ... chicken with wild rice and vegetables you could recognize ... and this beauty!!!  White chocolate covered vanilla ice cream around raspberry sorbet!!  And I could have had TWO!!! 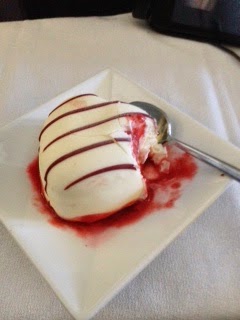 Once the guy to my left turned off his iPad with volume levels of TEN (no ear buds) after being asked THREE times by the Flight Attendant (really people, why are you so rude!!!) it was an uneventful flight.  When we landed, it was another story.  Our luggage at carousel 2 finally arrived at carousel 3 after 45 minutes of broken down trolley.  Not that it mattered, because there were no buses to the economy parking, where all 50 of us were parked!!  Another 45 minutes of freezing at the curb,  I was able to squeeze on a bus, and after explaining my predicament of not knowing where I was parked, got lots of expert advice and walked right to it!!!

At 1:00 am California time, there was the most beautiful harvest moon I've ever seen.  At 2:30 I arrived home to my waiting puppies!!!  Up at 6:00 to let them out, I was a time-zone wreck!!!  That time change just kills me every time.  I spent Easter Sunday on the couch!!!  At least until both dogs got sick all over the house from 4-5:00 before I could get them outside, from what I have no idea.  It was a disaster!!  Two hours later I crashed on the couch, just long enough to not sleep last night.

It's Monday now and I feel like a Monday!!  It will take another day or two for me to get back to normal ... but in the meantime, I have to get busy packing for the next adventure!!!  Where's the aspirin!!!
Posted by Nancy Kissack at 7:34 AM